Overloading on Tight Leash, Truck Cos Hit the Fast Lane

Overloading by commercial vehicles (CVs) has often proved the bane for India’s road network. Although the practice has not entirely been stopped just yet, stricter enforcement of the rules by federal and local government officials is ensuring better compliance and a key beneficiary of the move is the truck-making industry .

Among the leading truck makers, Ashok Leyland may benefit the most as it has the biggest share in the segment of freight carriers above 26 tonnes. Growth in this segment is outpacing the rest of the industry three times to one.

The Supreme Court had passed a directive to curb overloading in December 2015, and the tough measures on the ground are visible now. Several state governments such as Uttar Pradesh, Punjab, Rajasthan and Tamil Nadu are enforcing stricter compliance to reduce overloading and are imposing hefty penalties.

Lucknow has taken action against 18,112 vehicles in the first quarter of FY17, according to the state transport minister, and plans to use digital and satellite technologies to keep an eye on overloading of trucks that may sometimes be as high as 100%.

Furthermore, the ministry of road transport has directed toll companies to install electronic surveillance to reduce overloading by implementing the weigh-in-motion system. The result of strict compliance can be gauged from the fact that some toll operators are reporting revenues rising more than 20%.

According to a Nomura estimate, strict enforcement could translate into incremental demand of 300,000400,000 trucks, or equivalent to 100133% of FY17 MHCV volumes. The brokerage added that the demand impact could be higher if the entire 30 lakh MHCV (including Intermediate commercial vehicles) fleet is taken into consideration.

Besides this, the implementation of the E-way bill from October 2017 will bring in greater transparency in goods transportation.

The combined impact of strict compliance and lower cost of ownership is increasing fleet-operator preference for higher tonnage vehicles. In the past two months, volume growth in the more than 25-tonne segment has been 60% and 100% YoY. 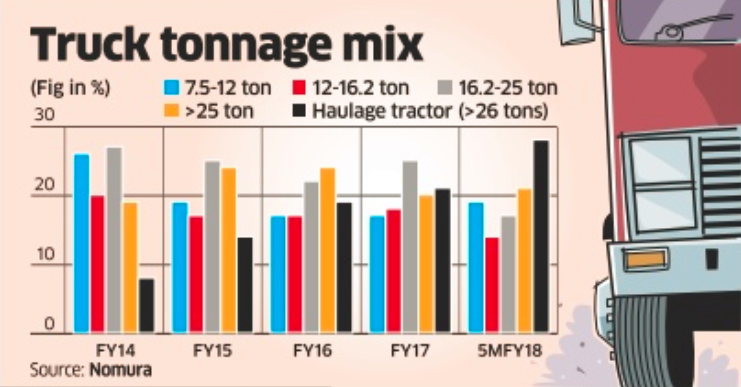 The share of trailers (or haulage trucks) has increased to 28% in the first five months of the current fiscal as compared with 21% in the previous fiscal. This has been the prime reason why tonnage growth of trucks has outperformed truck sales volumes.

Ashok Leyland has a dominant market share of 49% in the more than 26-tonne haulage segment. Nomura raised the volume estimate for Ashok Leyland by 5% and 12% for FY18 and FY19, upgrading the rating to `buy’ from `reduce’.

Also, Ashok Leyland is quite aggressive in other segments of the market. The company’s share in the MHCV segment increased 2% in FY17 over the previous year, and nearly 10% in the past three fiscals.